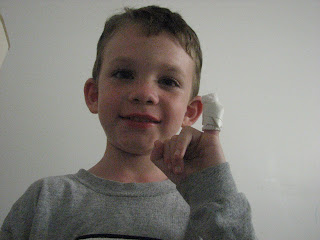 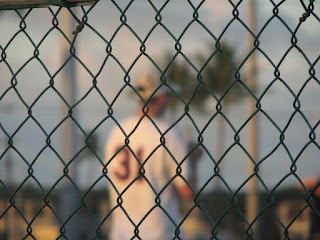 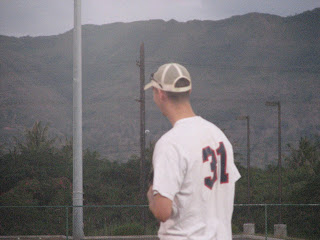 I got an email from my Mom today. Very concerned ( after reading Harmony's blog concerning x-rays) and let me know that it had been 8 days since I updated my blog. So, I apologize. I really haven't fallen off the face of the earth...although it seems that way sometimes.

Ben got home( after a delay) on Monday night. The kids were soooo excited to see him. Except for Harmony who decided to skip out on going to the airport and going to Girl Scouts. They were working on a fashion show and she did not want to miss out! So the big boys and I went. Ben of course, came bearing gifts. The kids had a blast opening Legos, video games, movies, books etc. etc.

Tuesday Harmony informed me that she had signed up for the bookfair and would need to have her project turned in the following morning. I wanted to strangle her little neck but instead, I took her to the NEX in hopes that we could find what she needed. We spent maybe 2 hours on it but she was happy. So I was happy. The next day however, she came home in tears because she hadn't won a prize. I had to explain to her that some kids had put days and weeks into their projects and she had only spent a couple of hours. A lemonade stand with her friend eventually got her mind off of it and she was very happy with just her participant ribbon.

Thursday Ben had a softball game. Since Spring Break had officially began, I took the kids down to the field to watch him. On one side there is a nicely lit park although the toys leave something to be desired. However a little bit down the sidewalk is a nicer toy, just no lights. I took the kids over anyway and everything was going fine until...Connor and his friend Kameron crashed on the slide while playing Star Wars.He complained that his finger really hurt. So being the mean Mom that I am, I gave him a kiss and a hug and told him he was fine.

The next morning he wakes up and his finger is completely swollen. I felt awful. I took him to the doctor and she said to get x-rays just in case it was fractured. It wasn't but it is still pretty swollen. She said because of all the soft tissue on the finger it could take a little while to go down.The kid had a fun story to tell though!

Saturday I felt like I got nothing done. I went to a baby shower, which is always fun hanging out with friends, then grocery shopping. I took the kids to see the Spiderwick Chronicles and they were scared to death! Connor was in my lap, literally shaking, using my hand to cover his eyes.Ethan was next to me with his face buried in my shoulder saying, " I want to go home. I just want to go home." Harmony sat with her knees up to her chin and a stuffed animal in front of her eyes. I had no idea they would be so scared!

Sunday was a pretty typical Sunday for us, with out too much excitement.

Today, Harmony was off with her Girl Scout troop riding horses. Her leader said they had a great time but the girls were really hot and complained a lot about being outside for so long. I think they were expecting an air conditioned barn or something! Harm's leader is so great and she has a lot planned for them this week. Thursday night she gets to go camping. She is really excited and I have to go and find her all the gear she needs!

So there you have it. An almost complete wrap up as to what has been going on in the Turner household. And just to give her a little plug...you should head over and check out Harm's blog. She has been better about keeping it updated than I have. If you don't have the address you can email me for it!
Posted by Your favorite sister at 5:12 AM